What do you think of Alec Baldwin? 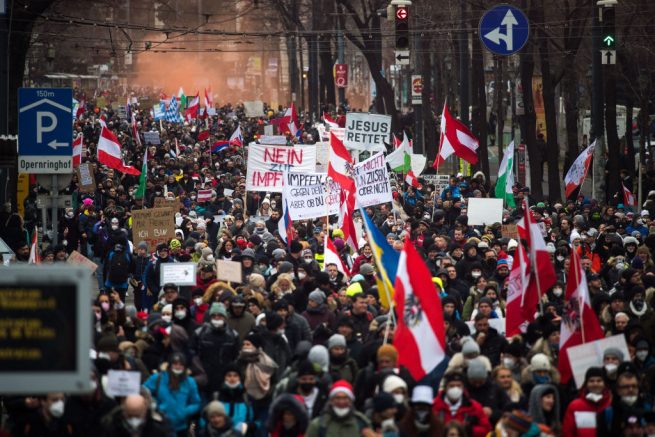 VIENNA, AUSTRIA – DECEMBER 4: People protesting against lockdown measures and COVID vaccinations march through the city center during the fourth wave of the novel coronavirus pandemic on December 4, 2021 in Vienna, Austria. (Photo by Michael Gruber/Getty Images)

Saturday night, thousands in Barcelona attended a protest against regional Catalonia’s vaccine pass system. In November, the Catalan high court ruled the region’s parliament was allowed to institute a new COVID pass law, which requires proof of vaccination or previous infection to enter restaurants, bars, gyms and other venues.

Now, despite being 80 percent vaccinated, adults in the region are being told if they want to eat out or improve their health at a gym, they must first show government papers proving medical cleanliness to authorities. One man, a professor of Chinese medicine, said there’s so many people who have adverse side effects to the vaccines that it’s morally wrong to force people to get the COVID jab.

“The deceased [by COVID-19] are mostly vaccinated people instead of non-vaccinated. That’s in all hospitals,” said Vincente Fuster. “And you must also take into account that a big percentage of patients arriving at emergency units are because of side effects from the vaccines. Doctors who are sincere and open to speak say that 10 percent of those patients are because of the side effects of the vaccines.”

Nearby in the Netherlands, protests have once again started up as the government imposes new lockdown measures on the 73 percent vaccinated population. The protests across the region were mostly peaceful, which couldn’t be said for the protests just two weeks before.

When the government first announced a ban on unvaccinated Dutchmen and Dutchwomen entering many public places, riots took over the major cities. The proposed law faced such bitter backlash that parliament decided not to pursue it for the time being, and has instead opted for general curfews on bars and restaurants.

However, this has still incensed many of the Dutch populace who feel they have been going through the motions for too long.

“If you check us, we walk here. We are walking for one and a half year already and we’re still not sick,” claimed Hans Buijs. “We are not super-people. We know what we do. We know that we don’t have to be vaccinated to be okay.”

In neighboring Germany, the government has followed through on what the Dutch tried to do, but backed down from. Unvaccinated Germans are being forcibly locked in their homes, only allowed to leave for work or groceries.

Those who show the state-enforced medical pass are allowed to freely go about their lives for the most part, though local restrictions may still apply. Outgoing Chancellor Angela Merkel, raised under communism in East Germany, said the shutdown on people who made alternative medical choices is “an act of national solidarity.”

German protestors said they fear the government talking about implementing forced vaccinations onto the whole population, showcasing an ultimate suppression of individual choice.

“I am here today because I am afraid of the mandatory vaccination that we see will be implemented in Austria. I believe there are a lot of side effects and if I decided for a coronavirus vaccination that could endanger my body, it must be my choice,” said Alina Nesterowska.

Austria itself is the first nation where talks of restrictions on the unvaccinated, along with general mandates, began. In the past month, Austria’s government announced Europe’s first lockdown for the unvaccinated.

While they backtracked a day later, favoring a general lockdown over the holiday season instead, they announced that the government would begin mandating the vaccine for all Austrians starting in February. This has prompted weeks of protests with dissipation not occurring between weekends.

In Vienna this past weekend, over 40,000 were estimated to have shown up to express their disdain for restrictions and forced medical treatments. People carried signs calling for control over their own bodies, new elections to be called to get rid of the current government imposing restrictions, and calls to “make Austria great again.”

Some said they don’t want the vaccine forced on their children because it’s untested. Others said they just want to see freedom return to their once democratic rights-based nation.

“I’m here because I’m against forced vaccinations. I’m for human rights and the violation of human rights should be stopped,” said one protester.

With many restrictions and forced medical treatments being proposed before discovery of the Omicron variant, other governments could be seen doubling down instead of backing off restricting citizens. In the meantime, all countries in Europe who are proposing mandatory vaccinations and fresh lockdowns at this time, say at least two-thirds of their populations have received a minimum of two jabs. 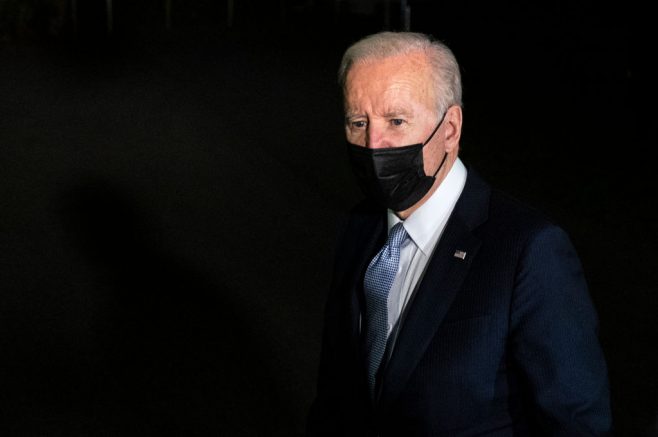 Americans are criticizing Joe Biden and his administration for making promises they have avoided keeping for more than a year now.

It’s been a year since Biden broke that exact promise saying he wouldn’t mandate COVID-19 vaccines. Biden told the American people back in December of 2020, he wouldn’t make vaccines a national requirement. However, today people are losing their jobs due to his federal mandate.

Not only did the Democrat leader break his promise, but he also had his administration and medical advisors participating in those lies.

“We don’t want to be mandating from the federal government to the general population. It would be unenforceable and not appropriate. Definitely not,” Anthony Fauci once said. “You don’t want to mandate and try and force anyone to take a vaccine. We’ve never done that.”

Earlier on, White House Chief Medical Advisor Fauci insisted the federal government wouldn’t mandate the vaccine. But the only thing America’s doctor has done is let people down with lies.

Biden previously vowed he would “do everything in his power” to protect Americans, however, his administration’s handling of COVID speaks for itself. Even with a so-called lifesaving vaccine being available, there have been more COVID deaths under the current administration than under the previous one.

One year ago today, Joe Biden promised there would be no vaccine mandate.

Meanwhile, Biden has been pointing the blame towards Republicans and people who are skeptical about getting the jab for politicizing vaccines and the virus in general. In October, he said Americans should be getting vaccinated because it’s “about being patriotic and doing the right thing.” In addition, his own vice president didn’t hold back from giving her thoughts on the matter.

These lies may stem from a year ago, but we continue to see these patterns from the left who promised inflation would go back to a normal level months ago. However, today, it’s the highest it’s been since 1990 and Democrats want to solve it with a trillion-dollar social spending bill as if it won’t add to the nation’s budget deficit.

Amid all the lies, Biden’s approval rating remains under 50 percent and a recent poll suggests 60 percent of all U.S. adults say the country is headed in the wrong direction.

“What happens if these companies just decide next year, ‘well, Republicans, they’re all insurrectionists. Let’s shut off all their credit cards and banking so they just can’t raise any money,’” asked Nunes.

Nunes suggested the most important threat is what Big Tech’s control of the internet is doing to the country and it’s possibility of becoming even more tyrannical in the future. He highlighted how users’ freedom of speech is being censored on the internet without them even realizing.

“Between Facebook and Twitter, and what Google’s doing and Wikipedia and everything else, we’re just getting overwhelmed by the censorship. And so, the most important issue at the highest level for the future of a Democratic Republic is going to be the reopening, so to speak, of the internet, with the free flow of information…whether that’s social media or video platforms or news,” he said.

The Republican’s remarks come after lawmakers in Congress feuded over Big Tech this week as Republicans continue to push platforms should be held liable for censoring or amplifying posts of their choosing. Nunes said the free flow of information and being able to speak freely in the internet sphere is the only way to reach those accustomed to watching fake news.