Ken Block, a legend in the world of motorsports, died Monday in Utah at the age of 55 after a snowmobile accident.

Block had been riding on a steep slope when the snowmobile flipped and landed on top of him, the Wasatch County Sheriff’s Office said in a Facebook post.

Block had been part of a group of riders, but was not with them when the accident took place, the sheriff’s office said.

“We are saddened to hear of the loss of Kenneth and our hearts are with his family and friends so deeply affected,” the sheriff’s office posted.

Block had co-founded Hoonigan and DC Shoes before moving on to the world of motorsports, according to ESPN.

“It’s with our deepest regrets that we can confirm that Ken Block passed away in a snowmobile accident today. Ken was a visionary, a pioneer and an icon. And most importantly, a father and husband. He will be incredibly missed,” Hoonigan posted on Instagram. 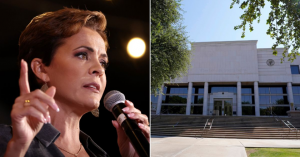 Previous post Kari Lake Wants to Take Her Case All the Way to Ariz. Supreme Court, and She Just Made It Official